Time for the third follow up on how this years goals are going. Damn time moves fast.

Spend time with my daughter – going along nicely. Due to some sickness I’ve almost spent to much time with her

Loose weight – Going good except around the 14th I was alone with the kids for a week and the 3 ½ yrs old became sick so no sleeping for dad. You can see the weight curve going up during that week. No sleep –> low blood sugar –> unstoppable candy cravings

So far this year has been going pretty good:

Clean up the attic – Status Q

Learn Ruby – Coming along, though slowly. But I started on my little hobby project: a site for my team with some attendance rsvp’s, a wall to post on and stuff. Will put it up on github as soon as it’s something that works.

) by starting reading the RSpec Book, which is an awsome read but doesn’t really get me closer to creating a site for the team. But a really good dive in to BDD, Cucumber and such.

Windows Phone 7 App – All I’ve done is to locate a series of web casts on channel9 that I will use as staring point.

Read up on running my own business – not done much more this month.

Clean out binders – Progress! Two more binders are now in PDF format! So 4 out of 8 done. 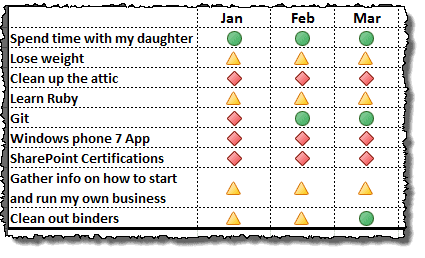