Becoming a house owner I felt a need to mix in some nerdyness with all the home renovation. Lately I’ve getting in to the Raspberry Pi and when a friend at work told me about the 1wire components that could be connected using USB and no soldering I was hooked.

This post describes how I got it up and running to log temperature at two places and humidity at one.

This is my first stab at this so the scripts are in a first version just to get it up and running with a lot of redundant and unpolished code. Also, this is the first time since switching over to wordpress I’m trying to use github gists for code. If it looks wonky – please let me know.

I started out with the latest drop of Raspian Weezy from http://www.raspberrypi.org/downloads and used win32DiskImager to get the image on to the SD card. Plopped it into the Pi and was off to the races.

I used ssh to execute stuff on the Pi, it was enabled by default in my Raspberry. I looked in my routers admin ui to get the IP-address. I used Putty as

Next up was getting the WiFi working. I borrowed a wifi usb dongle from my brother: Wireless USB 11N Nano Adaptor 802.11N (WiFi Dongle). Which I plugged in one of the USB ports.

Then I cracked opened the /etc/network/interfaces which looked like:

and changed it to this:

After a reboot the wifi was up and running. To verify that the Pi got an ip-number I used the ifconfig command.

Now I put the raspberry up on the attic and connected the sensors.

So, my weapon of choice here is to use 1wire components. I’ve bought a little board with humidity and temperature on that I connected to the Raspberry Pi using USB. Here is the components (the links are to a web shop in Swedish):

To get some readings from the sensors I needed to set up One-Wire File Systems called OWFS. This is where I thought my years in windows-land only would bring my experiments to a grinding halt.

But lo and behold, thanks to this awesome tutorial (also in Swedish) I managed to trickle through some very unixy make commands.

My weapon of choice is Ruby, mostly because I’ve played with it and like it and I don’t know any python and mostly wanna forget C and C++. To get it running I first had to install a bunch of stuff.

Proftpd ftp server to be able to transfer files with ease.

Next up was ruby.

In order to be abele to install native extensions such as the json gem I needed to install ruby 1.9.1.-dev, I don’t understand why but then again I’m not a Linux guy.

When I was done with that it looked like this:

After that I went ahead and installed some gems I know my ruby scripts needs.

For logging I’m currently trying out both Cosm (used to be Pachube) and TempoDB, so I’m logging to both. Therefore I need to install both client libraries:

First up, logging to cosm 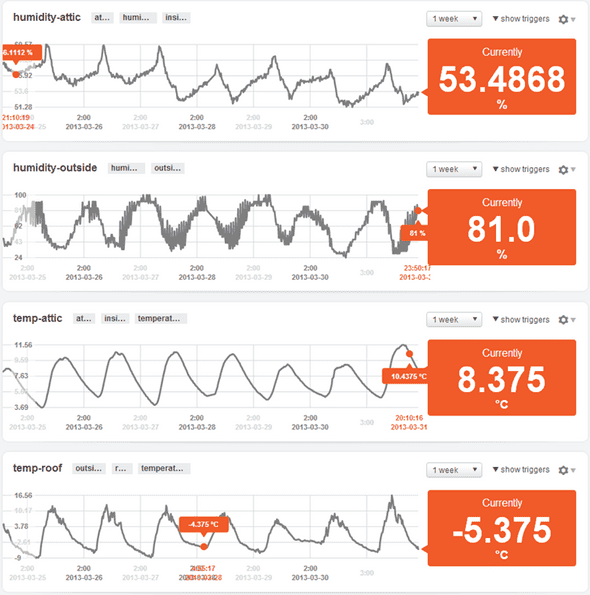 And next up logging to TempoDB: 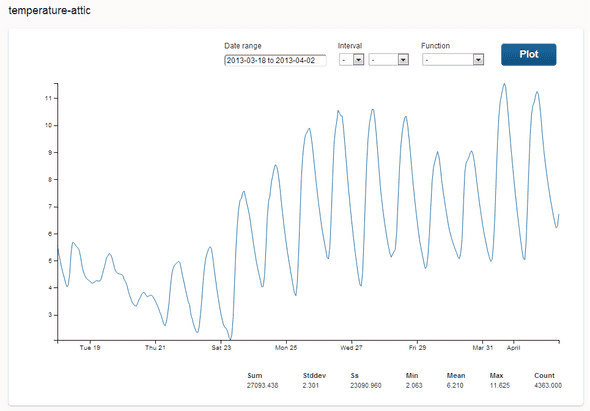 One drawback for me is that TempoDB only lets you query one series at the time.